As far we have been able to determine, the onion dates back to around 3000 BC. The fertile Mesopotamian soil near the rivers Euphrates and Tigris was most probably home to our Holland onion. The ancient Egyptians were also familiar with the onion. The Exodus story in the Bible refers to how Israelites craved onions during their journey through the desert. We also know that the Egyptians used outer onion skins as a natural colouring agent. After the onion was introduced

in Europe by the Romans in the 13th century, it quickly became a popular vegetable and flavour among all levels of society. This still holds true today. In terms of volume per main meal, the onion is the most consumed vegetable in the world. The worldwide consumption is around 9 kilos per head of population but in Libya, for example, the average consumption is up to more than 30 kg per person per year. The growing global population, which is expected to include more 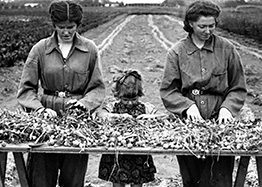 than 9 billion people by 2050, will on average require an additional production of over 700,000 tons. The global production currently amounts to 70 million tons.

The growing of the Dutch onion has taken off enormously since the beginning of the last century. Many Zeeland farmers started growing onions on small plots next to their homes. This is why growing onions has always been a real family affair in the Netherlands. It also meant that knowledge was passed on from father to son and continues to be perfected. As a result the Holland onion is currently a global market leader to be reckoned with.