For every newsletter we publish a new videoclip on our HOA YouTube channel. In our new video clip ‘groundbreaking Dutch onion science’ we show you something that has never been shown before anywhere in the world. The sequence of the sixteen billion DNA letters of the onion has been cracked. One of the largest plant genomes has been deciphered and finally, the onion has revealed its secrets.

A world-class breakthrough has been made! Almost 20 years after completing the human genome project,  Dutch scientists have succeeded in completely decoding the DNA of onions.

The DNA of an onion is huge, complicated and mysterious…
If you think that the 3 billion DNA letters of the human genome is amazing: the onion in your vegetable basket, with its beautiful golden tunic, has no less than 16 billion letters. This means a string of DNA over 10 metres long. DNA that is miraculously folded into each onion cell. If you would write these characters on A4 paper, it would be over 5 million pages of text!

Five Times Bigger than the Human Genome
So the onion genome is astonishingly large. To be specific, 16 GB in total... That's no less than 5 times bigger than the human genome and 18 times bigger than the tomato genome. More than eight years after the publication of the tomato genome, Finkers and Scholten, the two scientists par excellence at the Wageningen UR, have been able to succeed in what no one had been able to do before: they finally have uncovered the secret of the Allium cepa genome.

The Genome Scientists
Dr. Ing. Richard Finkers is a researcher Genomics & Application of Big Data and Dr. Ir. Olga Scholten is a researcher Alliums. Both scientists are employed by the prestigious Wageningen UR and both have expertise in plant breeding and plant resilience.

The De Novo Sequence
Scholten and Finkers chose an onion variety with the wonderful codename DHCU066619 as their case study. This so-called DH line has been developed to turn normally heterozygous diploid Allium Cepa into a homozygous diploid and by doing so, each chromosome pair has exactly the same genetic sequences. Without this development, the de novo sequence would have been practically impossible.

Revolutionary DNA Reading Device
In addition, the accelerated development of the techniques used to read DNA made it finally possible to completely sequence the onion genome. The introduction of nanopore technology, a mini cartridge with a solution of all the substances necessary to read DNA molecules, further revolutionised the sequencing process.

Nanopores
Each of these cartridges contains 8,000 nanopores, so it can read no less than 400,000 gene bases per second. The miniature version of this revolutionary DNA reading device, the MinION, can even give instant results when working in the fields or in a lab, just by plugging it into a laptop.

Evolutionary Know-how
The disclosure of the onion genome sequence will not only be useful in better understanding the biological processes of onions. It will also give evolutionary insights into and hidden properties of the wild varieties, families and ancestors of the current onion.

Hot Onion Fields
The sequence helps to quickly identify genes that are responsible for, for example, disease- and pest-resistance, stress factors (e.g. heat, drought or salt) or improved absorption of nutrients by the onion plant. It also helps to discover the reasons why an onion grows a bulb at a certain day length and uncover the genetic secrets of early or late sprouting when stored. In short: these are key factors in helping to produce sufficient food in the future, especially in the light of population growth and the fact that onion fields are becoming increasingly hotter and drier.

Scientists, anywhere in the world, can now get started using the available data of the cracked source code of the glorious onion. 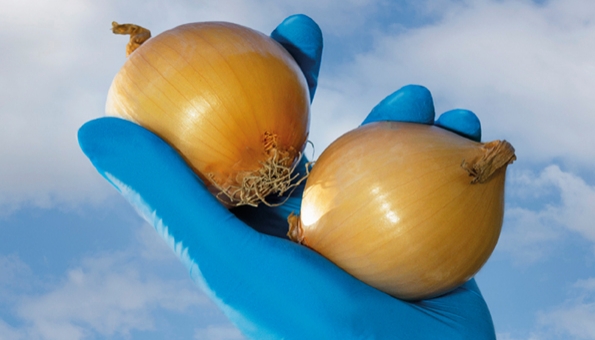