It took a while, but the complete DNA sequence of the onion has finally been decrypted. Sixteen billion bases show that the onion genome carries 5 times more information than the human genome. The door to a treasure trove of genetic information is now wide open.

From now on, scientists and researchers will be able to discover the position of the so far hidden characteristics of the onion's DNA. For example, now it will be possible to analyse the coherence between families of the onion (e.g. garlic and leek) and other bulbous plants for certain properties. A wonderful step forward towards a sustainable food supply in this time of climate change and the ever-growing world population. All thanks to the groundbreaking  research of eminent Dutch scientists at the Wageningen UR under the inspiring leadership of Dr. Ing. Richard Finkers and Dr. Ir. Olga Scholten. 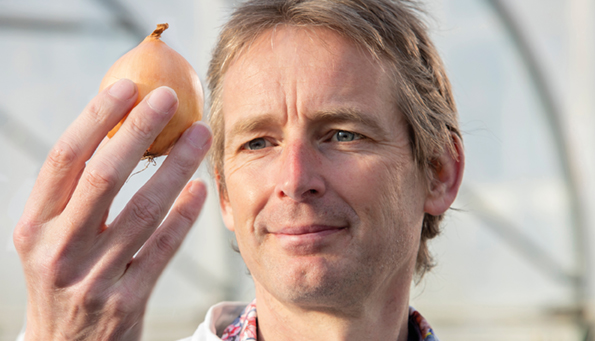 Number 1
Onions have a high economical value for the Netherlands as 90% of the harvested onion bulbs are exported all year round to more than 140 countries worldwide. In terms of global production value, the onion ranks second after the tomato. In volume terms it is the absolute number one. However, our knowledge of the onion genome was poor in comparison to, for example, the tomato. This is partly due to the enormous size of the onion genome, which is no less than 18 times bigger than the tomato's and more than 5 times bigger than the human genome.

However, what is a Genome Exactly?
In simple words, a genome is a contraction of the words ‘gene’ and ‘chromosome’. It refers to the complete set of genetic information  stored within a cell in the chromosomes. These chromosomes are made up of DNA that can be transmitted into RNA, which itself carries the set of instructions for protein synthesis.

Compare the genome with a weighty tome. This extremely heavy book that is written with just four letters of the alphabet: A, T, G and C. The chromosomes are the chapters of the book and the genes are the words. Among the known functional genes, many apparently nonsensical words can be found - words of which we don't yet know the meaning or function. In case of the onion, the seemingly useless information is no less than 95% of the total. The Dutch scientists Finkers and Scholten's goal was to put all words, including the seemingly nonsensical ones, in the correct order. Furthermore, each paragraph had to be connected to the correct chapter (chromosome). Putting it like that, this task might seem not too difficult, except that the onion genome has 16 billion letters. That's approximately 5 million pages or the equivalent of roughly 4,000 bibles! How to pull that off...

Whole Genome Sequencing
That's exactly what Finkers and Scholten with their team started 6 years ago. Because of the important economic importance of the onion to the Netherlands, the necessary research funding was provided by Dutch seed companies Bejo, De Groot en Slot, GenomeScan and the Top Sector T&U and placed under the umbrella of a public-private initiative named SEQUON. Just like their colleagues at the Human Genome Project, Finkers and Scholten had the wind in their sails and the development of the sequencing technology accelerated. Both scientists initially planned to concentrate only on the sensible words in the onion DNA book. However, when a new type of sequencer was introduced, they decided to focus on sequencing the complete genome. 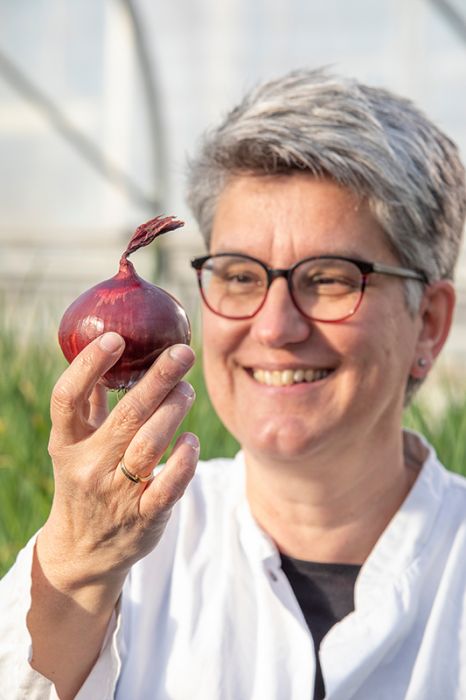 150,000 Pieces of the Puzzle
Although Finkers and Scholten initially planned to isolate and analyse each piece of DNA separately, now they could change their work method. They started to sequence short pieces of base pairs and therefore raw DNA data could be generated much quicker. The more pieces that were identified, the more pieces were found that overlapped. This resulted in a kind of huge jigsaw puzzle of 150,000 pieces, but, thanks to the fast computers, Scholten and Finkers managed to put the major part of all these pieces together.

Unique Sets of Genes
Putting the puzzle in the right order reveals what makes an onion really an onion. The function of many genes are already known, because you can find them in almost every plant. For example: plumule, wax layers, stomas or photosynthesis. However, the other pieces are the ones that are the most fascinating. These often are the unique sets of genes that define the taste, smell or shelf life of the onion or to what degree the onion is resistant to a certain pest. Now this information is published and publicly available, researches world-wide can use this data to study where these genes are, how to activate or deactivate them or give them an extra boost. A really great gift from the Netherlands.

Three Steps
Deciphering the complete genome consists of three steps: sequencing, assembling and annotation. Sequencing means reading the letters A, T, G and C of the DNA that's cut in a hundred thousand pieces. The so-called short-read sequencing methods made it possible to read bigger pieces of DNA text, up to 5,000 letters in one go. This was particularly useful to map the repetitive regions of the genome.

Then, all these pieces of text had to be paste together in the correct order. Putting this puzzle together primarily means looking for repetitive pieces of text, pasting them in a row and continuously repeating this to create increasingly longer pieces of text (called scaffolds). Then these scaffolds are assigned to a specific chromosome in the correct orientation. Humans have 3.2 billion base pairs that are divided among 23 chromosomes. However, an onion has 5 times as much base pairs that have to be connected to just 8 chromosomes.

What does all this DNA text actually mean?
Annotating the genome requires scientists to try to discover the function of these genes. For example, by comparing these genes with the genes of other crops such as garlic, as the Dutch research team have already done. Or, in future projects, by shutting them off and studying the effect it has on the growth of the onion plant.

Nevertheless, Finkers and Scholten have more than accomplished their mission. Researchers can now start using their groundbreaking work.

The genetic map of the onion is now freely available for all researches on https://www.oniongenome.wur.nl. 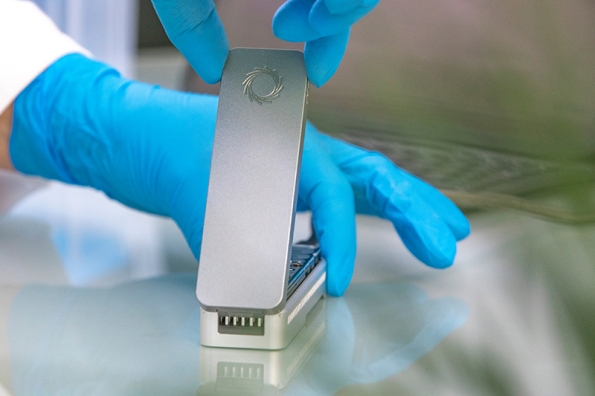