Yet again, it looks like 2021 will be another great year for our Holland Onion. Based on harvest forecast, it looks like the total export stock might reach 1.3 million tonnes. After the previous season, in which the epic export number of 1.2 million tonnes was easily exceeded, this season started off in full swing, although the demand is less wide-spread than in the previous season. Total exports for this season topped 537,000 tonnes by week 45. In 2020, 531,000 tons was sold to 129 countries in the first 18 weeks, compared with 486,000 tonnes in the same period in the previous (2019-2020)season. The trend of an average sustainable growth in Holland Onion exports of 4% per year is completely in line with the worldwide production growth.

One point to note is that the harvest in other countries has also been large which makes this season especially challenging. For example, 7.4 million tonnes of onions were harvested within Europe. This is over 700,000 tonnes more than in the previous season which was quite meagre with only 6.7 million tonnes. Record yield for Holland Onions
According to harvest estimates, the gross yield of the onion fields will be 1.6 million tonnes this season. That's almost 20% more than the previous season. This season, onions seeds were sowed on 30.1 thousand hectares, which is more than 10% than in the previous season. All-in-all, the forecast for this season is for an export stock of approximately 100,000 tonnes more than last season. This means that the Rock Star Veggie must do its utmost best in the global market!

Domestic consumption is on the rise
Domestic consumption of fresh onions also increased significantly in the first six months of 2021. With a growth of no less than 16%, the onion market is by far the fastest growing vegetable market in the Netherlands. This is partly due to the fact that restaurants were (partly) closed and people ate at home more. This is an opportunity for the onion to become an even bigger favourite in the kitchen! Sales of tomatoes and cucumbers lagged way behind with modest growth of just 2% and 3%. 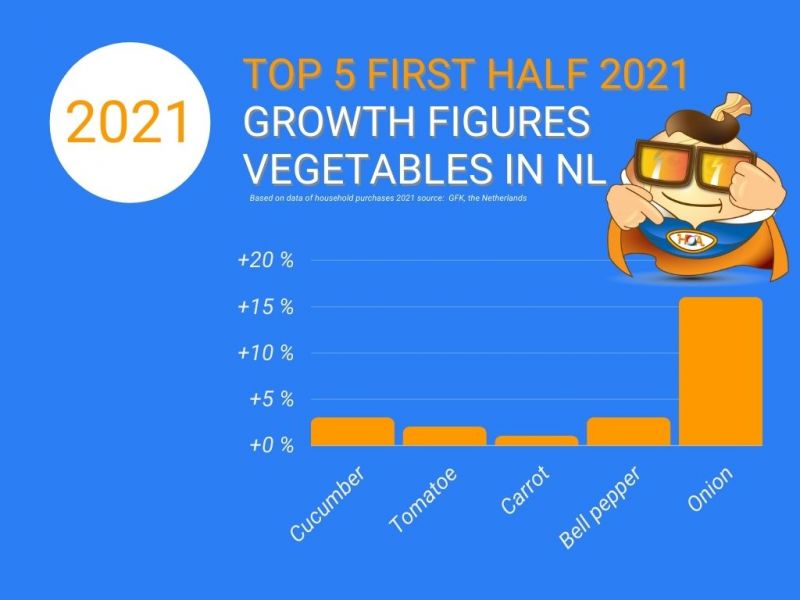 Export volume climbers
The Ivory Coast remains a big driver of export growth. It looks like they are definitely chasing down Senegal. Another big mover is Nicaragua. Export to this country more than doubled to over 16,000 tonnes this season. And the Central American neighbouring countries El Salvador and Honduras are also definitely in the race. Over in Asia, there's a significant growth in Taiwan and a steady growth in Hong Kong. Taiwan currently purchase more than 6,000 tonnes, claiming a firm position within the top 20 and Hong Kong currently occupies the 28th place, storming through the grid from 100th and 52nd place.

Social Export Hero
Although over 92% of the onion production worldwide is consumed by local markets, the other 8% is critical to fill local shortages worldwide. The Holland Onion, with a 20% share of the market, has functioned for decades as an extremely reliable gap filler that serves the word for a very decent price. This makes the Holland Onion an important and social service since many consumers in the biggest export markets have a low budget that's mostly spent on food.

A strong growth also closer to home
Despite Brexit, exports to Great Britain have risen again considerably compared to the previous season to over 46 million kilos already. The same can be seen with Italy, Finland and the countries of the former Yugoslavia Republic: Croatia, Montenegro, Bosnia Herzegovina and Kosovo. Export sales to Cyprus, Hungary and Romania are also worth mentioning. Cyprus climbed 46 places in the export ranking. And finally Turkey has also entered the market albeit with a modest amount of 50 tonnes. 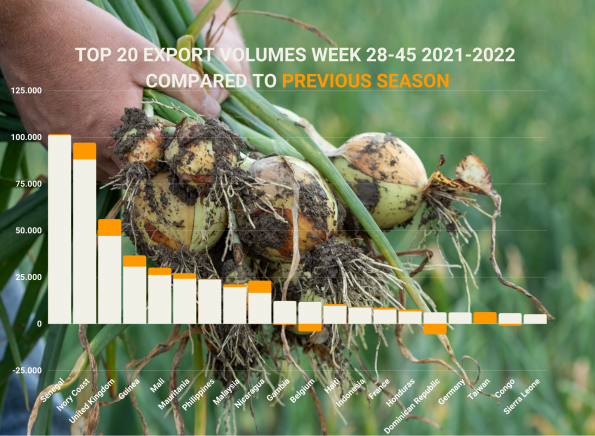