New export record for 3rd year in a row

The export figures of the Dutch onion are again coloured bright green for the 2021-2022 season. After the previous season, in which the export limit of 1,200 million kilograms was eventually passed, this export season also took off early. 62% of the total exported volume left the Dutch borders before the turn of the year. The export counter of Holland Onions easily passed the epic volume of 1,300 million kilograms and increased again by 85 million kilograms. This again means a substantial export growth, this season even 7% compared to the previous season. 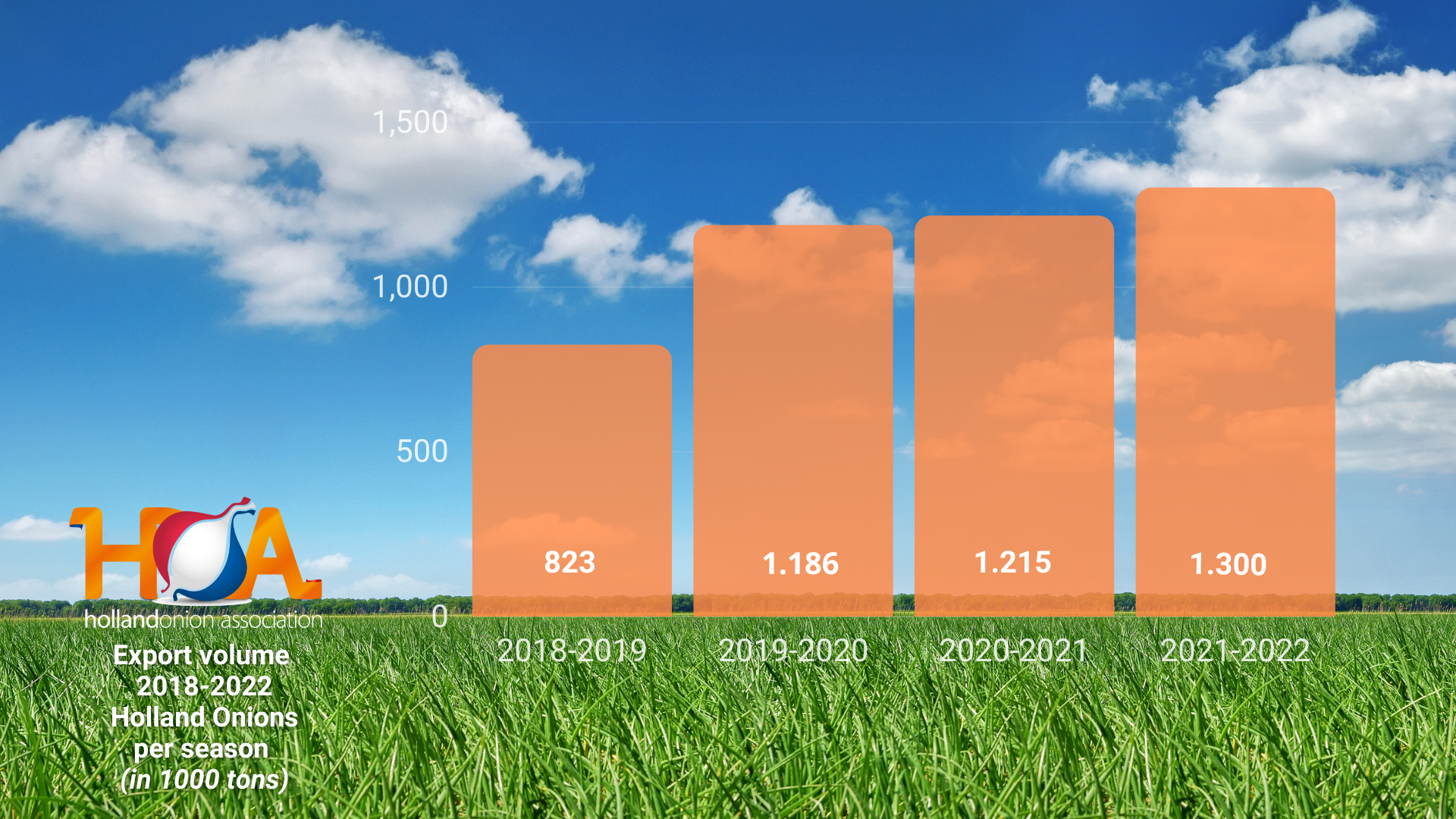 The number of importing countries this season was 129. Major sales areas from the last season such as Bangladesh and Sri Lanka have completely disappeared. This had everything to do with the fact that the biggest competitor of the Dutch onion, the Indian onion, was able to regain market share in that region.

Yield record of Holland Onions
According to the definitive harvest estimate of CBS (Statistics Netherlands), the gross yield of the onion fields was approximately 1.5 million tons. That is almost 12% more than came from the country last season. Only in 2011 the total gross revenue was higher. Seed onions were grown on 30.1 thousand hectares. That is 10% more than the previous season.

Domestic consumption also on the rise
There was also a significant increase in the purchase of fresh onions on the domestic market. With a growth of 16%, the Holland Onion is also with head and shoulders the fastest growing vegetable within the Dutch borders.

Holland Onion - social export hero
Even though 92% of global onion production is grown and consumed for the local market, the remaining 8% proves indispensable to make up for local shortages worldwide. With a market share of 20%, the Dutch onion dome (Holland Onion Association) has been functioning for decades as an extremely reliable 'gap filler' that serves customers all over the world with a fair price. This also makes the Holland Onion very social, because in the countries to which it is exported, consumers often have a tight budget from which the largest part goes to food.

Large volume risers
The largest volume increase in sales is Ivory Coast with 44,000 tons, closely followed by Great Britain with 34,000 tons and Guinea with 20,000 tons. Ivory Coast has thus broken Senegal's long-standing hegemony. What is striking is that Ivory Coast comes to the market more than 5 weeks earlier in the season than Senegal with large purchase volumes and also remains on the market when Senegal's doors close for import due to the available local harvest. Senegal is a country where its own production has increased in recent years, although consumption is also rising sharply, so that imports will remain necessary during the period when no own harvest is available. The top 4 and 5 in the ranking of absolute volume risers are Ukraine with 11,500 tons and Malaysia with 8,000 tons. Another volume increaser is Indonesia, where the import of the Holland Onion grew quite steadily with 7,500 tons to almost 25,000 tons.

On the Asian continent, there is also substantial growth to Taiwan and a strong continuing growth to Hong Kong. Both countries purchase more and more Holland Onions compared to last season, rising to position 37 and 50 in the export ranking. On the American continent, onion-loving countries such as Haiti, El Salvador, Puerto Rico, Guatemala and Nicaragua are slowly but steadily growing.

Significant growth closer to home
Great Britain gains almost 27% despite Brexit and purchases more than 143,000 tons of Dutch onions. Part of this growth is explained by the more accurate registration due to Brexit, which has made Britain a so-called 'third country'. This season 34,000 tonnes more went across the Channel and even 48,000 tonnes more compared to the previous year over the same period. The British are half self-sufficient for their domestically required onion consumption of about 670,000 tons, but are also heavily dependent on imports.

Ukraine
Ukraine has been importing onions from the Netherlands for some time. Last season, however, the import seemed to be halved compared to the previous year. This year, exports to the country besieged since February 24 are recovering and have shown significantly higher weekly volumes even since the war with Russia broke out. The country's main onion stocks are located in the southern regions. This seriously hinders the distribution of its own production and the country is now relying on imports from the Netherlands and Poland.

Poland is also showing fairly stable growth figures again. In addition, a considerable amount of Dutch onion crops are supplied as field crops that cannot be found in the weekly export figures. And what is certainly striking in the figures is the growth in exports to precision country Switzerland; from 600 tons in the previous season, the counter stops this season at no less than 2,700 tons. Finland should certainly also not be missing from this list, with growth from 3,200 tons to more than 5,700 tons. Although they are not top 20 volumes, the traditional Dutch proverb "Who does not honor the small ..." still applies.

Vietnam and Colombia open again for the 2022-2023 season
After a long time, two countries are reopening their borders for the Holland Onion and offer prospects for the new onion season that has already started. Colombia, in particular, can be a major buyer in the event of disappointing harvests in the region. 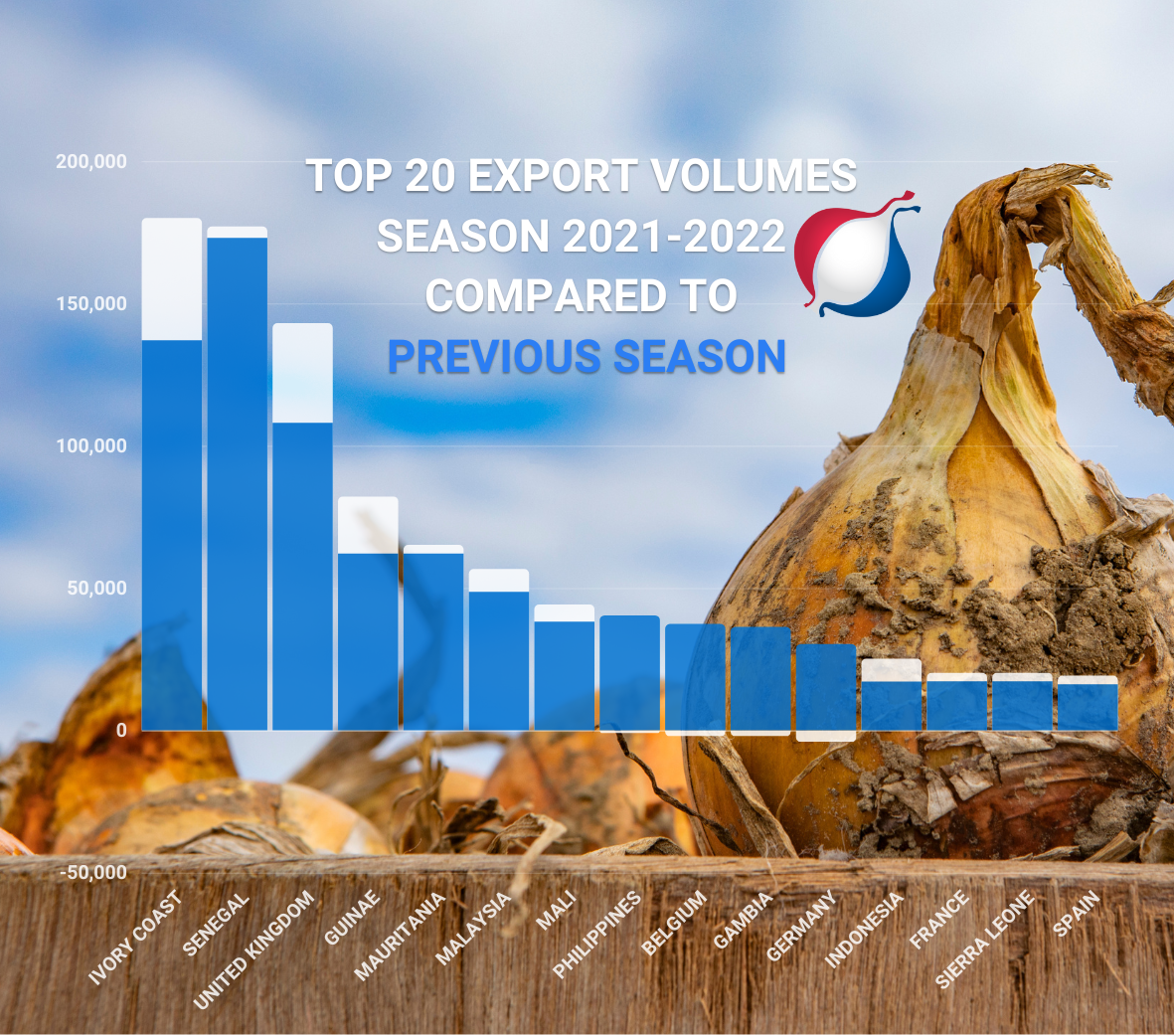